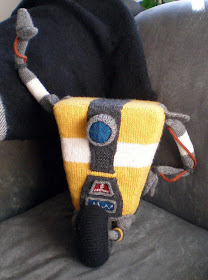 Greetings traveller! I am CL4P-TP; you may call me by my locally designated name, 'Claptrap'.

Claptraps are fun little robots you encounter in the Borderlands games. The poor things are often used for target practice and abused in other ways by the bandits of the Borderlands, so I spent much of my playthroughs wanting to give these poor guys a hug. Well, now I can!

Work on Knitted Claptrap started in 2010. I made decent progress for about two weeks, then Christmas season kicked in in full force and I had little time for extra projects. Alas, after that poor Clapson had to sit on my desk in a semi-finished state for almost two years. When Borderlands 2 was released earlier this year, it inspired me to finish my own little robot! 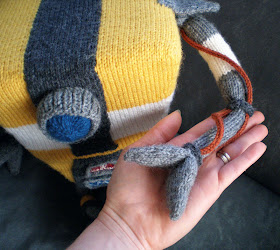 Then for some oh-so-important numbers and other facts. 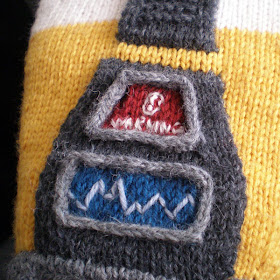 I wanted Claptrap as detailed as I could make him by knitting alone (plus a wee bit of embroidery). I could add a few more details, I suppose, but then I might go insane, so I say he's ready now.

So, what do you think?