In our household, Mr Morrgan is usually the chef. He enjoys it and is much more imaginative in the kitchen than I am, so having him do most of the cooking was a natural choice. Baking is more my thing. 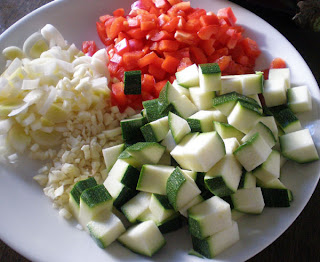 However, since I've lately spent more time at home than he has, it didn't seem fair that he'd have to work all day plus cook dinner, especially as just walking to work and back takes him 1-1 1/2 hours every day. So I decided to be brave and venture back into the world of cooking. 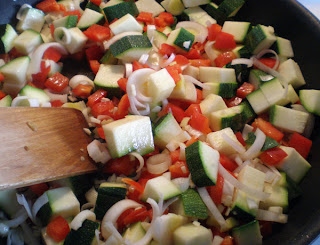 I've never been very interested in cooking, so I haven't bothered to learn that many recipes. It only took about a week to go through the usual suspects. Alas and alack, it was time to learn a new recipe.

Fortunately for me, I happened to spot something interesting in a magazine: a ratatouille pie. It was a pie (=baking) AND it had goat cheese on it. Perfect! 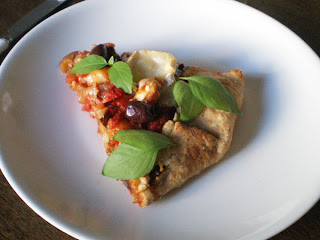 It was time-consuming, but I'm happy to say it was a success! Delicious both when warm and fresh, and when cold the next day. The only thing that would have made it better would have been to use homegrown veggies, but we only had our own lemon basil to put on top. It did make a very nice addition to the flavour, though.

The recipe can be found here, though it seems to only be available in Finnish. Basically the filling is a ratatouille made of eggplant, zucchini, capsicum (bell pepper), onion or leek and crushed tomato. The crust is rolled out thinly into a large circle, the filling placed on it and the crust edges are folded over the filling. After 20-ish minutes in the oven, goat cheese and olives are placed on top and the pie goes back into the oven until the cheese has melted.

As usual, I changed the recipe a little bit. I didn't have the graham flour the recipe asked for, so I made my own version of the crust:

Mix the dry ingredients together. Add cubed butter and work into a dough. Add water and stir/mix until you have a smooth mixture. Wrap in plastic wrap and keep in fridge while you make the filling.
Email ThisBlogThis!Share to TwitterShare to FacebookShare to Pinterest
Posted by Morrgan at Saturday, August 07, 2010
Labels: recipes

Yummy and healthy!! You are a great cook!

Ratatouille is such an ancient recipe and it is good to learn Ratatouille Pie.I would like to try this recipe.This recipe seems quite easy.

After looking at recipe I thought I should ordered right now as it is making me hungry for it. I love it and very thankful of you for the great recipe.

It looks so amazing that we start craving for it right away. It is also not very hard to prepare so definitely will prepare for my family. Really appreciate you for sharing it.

I like very much Ratatouille Pie. I always found of the recipe of the new item who i not making at home. So be thankful of sharing this informative recipe. I will try to make it. Have a nice day!

Ratatouille Pie sounds are quite Interesting. I am quite lazy for cooking. But Here you presented such a delicious recipe which I really like to make it. It looks very tasty. I will try this recipe very soon.

Thanks for this wonderful recipe tips.I really likes it.This is really healthy food.You can use this as a diet food.

After looking at the recipe I think I should be immediately ordered, as it is it makes me hungry. I like it very much thank you for the great recipes.

It is good recipe to tips. Ratatouille pie is ancient recipe.

It is very delicious and dish looks yummy and healthy.

I must explain, your publish will go to the nerve of the subject. Your pellucidity leaves me seeking to know much more. Just so you already, i will instantly seize your feed to keep up thus along with your web website. Sounding Out thank you is just my little way declaring bravo for a good resource. Take on my sweetest wishes for your next publication.

Thanks for taking the time to discuss this, I feel strongly about it and love learning more on this topic. If possible, as you gain expertise, would you mind updating your blog with more information? It is extremely helpful for me.

My friend told me this site.The blog is quite amazing and wonderful . for me its really hard to work for the legacy databases.

It's quite hard to find a good website. And I am very satisfied to have come here. The publications are doing great and full of good insights. I would be glad to keep on coming back here to check for a new update.

This was very informative. I have been reading your blog a lot over the past few days and it has earned a place in my bookmarks.

Perfect piece of work you have done, this internet site is really cool with great information.

Can't stop appreciating the taste....and this has created a problem for my girlfriend as I keep on asking her to cook this for me quite often. Your other dishes are also awesome and keep posting more new ones... that are spicy...yummmy...thanks :)

Great recipe, my wife read and cooked it. It was a fabulous dinner with this yummmmy food.

I asked my wife to follow the recipe and I should say "it was awesome"...keep posting more such recipes.

Thank you Mr. Morrgan for this delicious recipe. It was awesome o taste and often to have.

I tried this recipe and it was delicious. Thanks.
credit repair

how to convert videos said...

Wow.. Its a sound like an excellent. I am so impressed by that. It is really very testy. It is very healthy and testy.

Great loking pictures and great looking pizza too. Thanks for posting.

Awesome is the word I think best suits this recipe. Loved it and will be having this made this weekend.

Really good recipe. I love to have a great food like you share here. I m gonna tonight with my mom as I will say her regarding these.

Thanks for posting this awesome recipe. We had this cooked last weekend and everyone including me loved it. Post some more like this...

Looks like spicy one. It is also called as Pakoda in Eastern Indian Languages.

Smells good. I would like to have these recipe tomorrow. Its weekend and have to do something great enough. 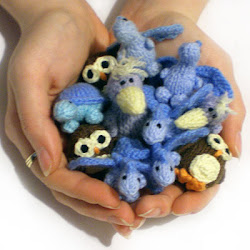